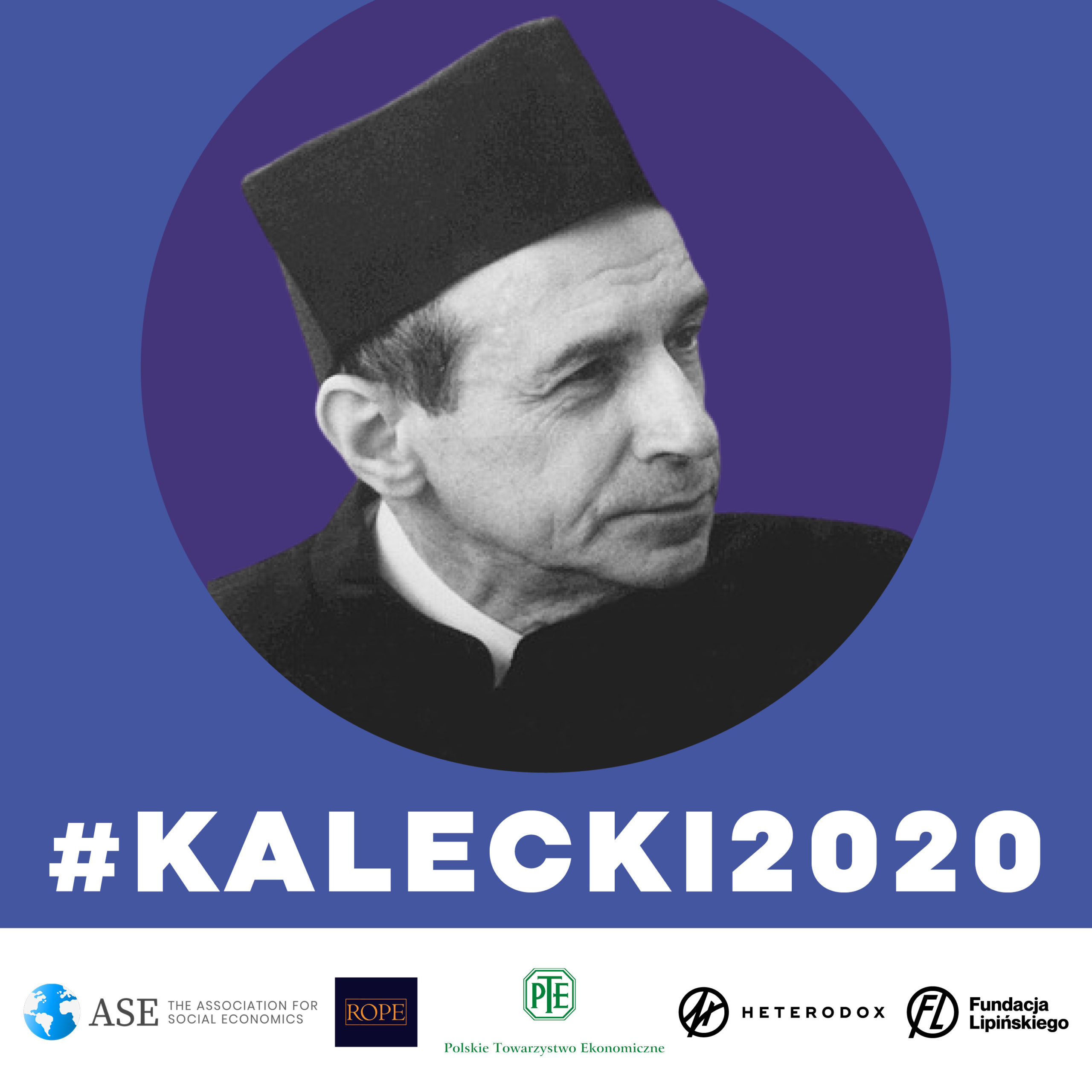 In this blog entry, I would like to share with you my opening remarks from the Poznan (Virtual) Conference on Kalecki and Kaleckian Economics which was held on September 24-26, 2020.

First of all, on behalf of the Edward Lipiński Foundation for promoting economic pluralism, let me say welcome to all of you who attend this Poznan (Virtual) Conference on Kalecki and Kaleckian Economics.

We are very pleased that this Conference can take place in 2020 despite the global pandemic. This year marks the 50th anniversary of the death of distinguished Polish economist Michał Kalecki, whose works many of us still admire.

I hope that wherever you are, whatever your time zone is, that you will enjoy this conference, and enjoy the performance of our many great speakers that we have sitting virtually around us – and I mean virtually – in the literal sense of the word.

I would like to say a few words about Lipiński Foundation which is the co-organizer of this event.

At this point, I would like to thank our co-organizers and institutional partners in this Conference, that is the Review of Political Economy, the Association for Social Economics, Heterodox Publishing House and the Polish Economic Society (PTE).

I am personally very proud to be a part of Lipiński Foundation. The Foundation is a young organization. It was established a year before the outburst of Covid-19 pandemic. Thus, for our young Foundation this Conference on Kalecki and Kaleckian economics is the first large event that we co-organize.

Let me say, at the very beginning of this talk, why we have established the Lipiński Foundation.

We do not perceive the economy as a closed mechanical system which behaves in the fashion of the Newtonian world of mechanics. Furthermore, we do not believe that economics is the discipline that should be based on 19th century physics.

In contrast, what we believe in is the study of the economy as an open system with interacting social creatures. We believe economics is a social science; and that the economy needs to be treated as a multidimensional and complex organism in which relations between human beings and the relation between them and their environment are the essential ones.

As pointed out by Hyman Minsky in his 1986 book titled „Stabilizing an Unstable Economy”, theory plays a double role in science:

In all disciplines theory plays a double role: it is both a lens and a blinder. As a lens, it focuses the mind upon specified problems (…). But as a blinder, theory narrows the field of vision. Questions that are meaningful in the world are often nonsense questions within a theory. If such nonsense questions are often posed by developments in the world, then the discipline is ripe for a revolution in theory. Such a revolution, however, requires the development of new instruments of thought. This is a difficult intellectual process.

In line with Minsky’s observation, we believe that some important questions that are crucial for how we live, and how our society is organized, are unanswered and most likely will remain unanswerable within the standard neoclassical theory.

This theory is, therefore, not just simply wrong, but it is not enough. It is not good enough to enable us to meet the pressing challenges of our time.

– why there exists this inherent instability in capitalism;

– why the wealth and income inequalities are rising so fast;

– why there are so little women in economics department at universities and in economic institutions.

How can we prevent the climate change that is threatening our existence on this planet?

These are urgent questions; but they have remained largely unanswered to this day.

In order to answer these crucial questions we need to use different theories. Like for example we shall make use of the Marxist theory, Minsky’s financial theory, Keynesian macroeconomic model based on the principle of effective demand, and finally, the Kaleckian model of growth and distribution.

We cannot afford to wait and pretend that everything is fine with the dominant theory that is taught in economics courses at universities around the world. Otherwise, we will be like small children driving a fake plastic car and saying that they are driving it good and fast and doing a nice job – while at the same time we will be staying at the same place from where we left. Not moving any further.

Therefore, as the main goal of Foundation is to promote pluralism of perspectives, and pluralism of approaches in the field of economics, we identify three ways by which we can achieve this goal.

And these three ways are connected to the person and the character of Edward Lipiński, who was a man of action. A mover, organizer and a manager.

He was very active on a number of fronts at the same time. He had done many things, and many things in which he truly believed.

He was the chief editor of the leading polish economic journal „Ekonomista” for almost fifty years. For over thirty years – including the period of second world war – he was the President of the Polish Economic Society. He was also a long-time Professor of Economics at both the Warsaw School of Economics and the University of Warsaw.

Edward Lipiński was a teacher and a mentor. He was the person that discovered the economic talent in young and unknown Michał Kalecki in the 1930s. He hired him to his Research Institute on Business Cycles and Prices – an institution that Lipiński established in 1928 and ran for over ten years until the outbreak of the Second World War.

What are the goals that we want to pursue as the Edward Lipiński Foundation? There are three main goals that we strive to achieve.

First of all, we want to increase awareness of the scholars and authors of the heterodox schools and heterodox traditions that have mostly contributed to the development of economic thought and whose vision of the world we truly and deeply share ourselves.

Secondly, we want to pursue the mission of spreading pluralism in economics by providing a platform and support for the people that teach heterodox approaches and who do research in the heterodox tradition.

Thirdly, we pursue our goal of discovering new economic talents – exactly the same as Edward Lipiński did throughout his life. Beyond his lectures and essays that he left us, he was the teacher and master of Michał Kalecki, he saw early his potential and he was the one who made him flourish in his Research Institute of Business Cycles and Price.

Michał Kalecki was an empirical economist. Kalecki’s “Próba teorii koniunktury” (now known as „An Essay in Trade Cycle Theory”) originally published in 1933, emerged during his work at the Research Institute. It was an effort to use the empirical evidence in the Marxist analysis of the capitalist economy and see what the implications were.

Let me now quote Edward Lipiński on this point, as it is important to see how he perceived his best student. In his 1971 obituary on Michał Kalecki, Lipiński wrote as follows:

It gives me a feeling of pride to recall that Kalecki’s theory of the trade cycle emerged before my very eyes, if not actually under my observation. This may be a good occasion to acknowledge frankly that I did not fully understand Kalecki’s discovery until Keynes’ similar theory had made the basis for effective stimulation of market forces. However it did not take me long to recognize Kalecki as an independent theorist with a formidable gift of deduction, who deserved to be supported. But, outside a small group of friends who were similarly associated with the extreme left (Ludwik Landau, Antoni Panski, and later, Marek Breit, and among the non-socialists, Jan Wiśniewski; all were killed during the war), Kalecki was not understood.

To learn more about the life and the economics of Edward Lipiński, see Our Patron site.

Let me give you now some examples of activities that our Foundation will be focused on.

But first, let me share with you my personal experience with studying the works of Michał Kalecki. First thing you need to know is that we do not teach about Kalecki and Kaleckian economics in Poland. We rather suppress him and his legacy.

For example, I spent the whole five years studying economics at University of Warsaw and was told about Kalecki only once. The course was “Advanced differential equations” and the teacher was a mathematician, and not an economist. Imagine this situation. It is almost like studying economics in Britain and never being exposed to Keynes and the Keynesian macroeconomics.

Let me now go back to our three main activities as a young organization.

The first field of activity we want to pursue as a Foundation is teaching. We want to organize conferences (such as this one), summer Schools (we plan to do MMT summer school in September next year), and workshops for college students and seminars for the undergraduate students, but also for journalists and market practitioners.

The second field of activity is editorial and publishing activity of the Heterodox publishing house that is now a part of the Lipiński Foundation. So far we have published Polish translations of ten game-changing heterodox books including:

A list of all of the books published so far by Heterodox Publishing House is here.

To paraphrase the title of Professor Osiatyński presentation on „Remembering Kalecki”, we want our great economic thinkers to be remembered. This is our third field of activity.

So in order to remember his teachings and his significant contributions in economics we plan to mark his legacy in the public domain, by building his memorial in his hometown City of Łódź. It is planned to be Kalecki’s bench or monument to honor his life and legacy.

We also aim to establish the Michał Kalecki Prize in Economics for the best essay and best academic student thesis in the field of heterodox economics.

So these are our goals and the vision of our Foundation.

To sum up, the mission of our Foundation is promoting pluralism in economics and our patron is Edward Lipiński. We want to be as good organizers as he was. As good teachers as he was. And as deep believers in the human creative potential as he was. Because, after all, the chief characteristics of his personality and his economics was deep humanism.

As Edward Lipiński wrote in one of his memoirs:

Economics is the science of social life and in particular, in one of the most critical areas – human creativity. Because all innovations and changes in the economic sphere are the same sort of creativity as artistic creation (…). It is impossible to solve any economic problem without referring to the broad context of the humanities.

Let me end my talk at this point with the above message from Edward Lipiński.

Thank you for your attention.

I hope that you will enjoy the rest of this Conference.